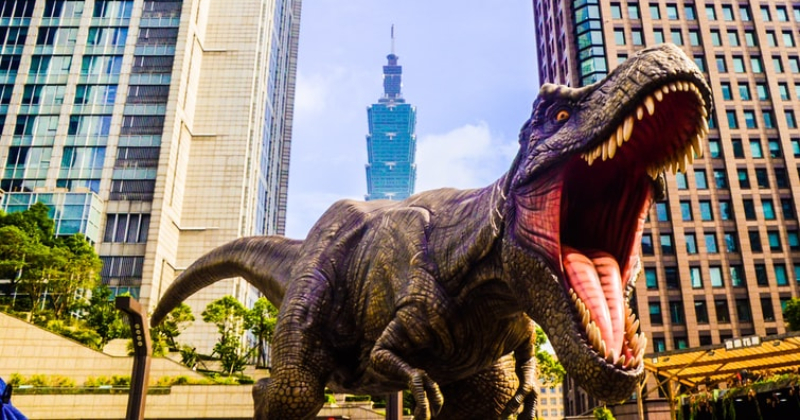 The most popular dinosaur species from Tyrannosaurus family, without a doubt, are the T-rex dinosaurs. Lets call them TeeRex as we love to call our beloved TeeREX character.

They’ve roamed the planet about 67-65 million years ago, being one of the last dinosaurs to ever exist on Earth. With that being said, many other animal species have evolved from T-rex dinosaurs, for example, lizards.

Of course, the funny exterior of TeeRex dinosaurs are also worth mentioning – these huge sized and scary looking dinosaurs with small, tiny arms. This might be why TeeRex has gotten so popular – because of its comic image so often seen in  many movies and cartoons.

Without further ado, let’s meet the world’s top TeeRex dinosaurs – the good ones and the villain ones. On what other dinosaur species have gained popularity over the years, read the article Most popular dinosaur species.

Even though T-Rex is so scary and dreadful, there are many good characters in the movies and cartoons played by it.

Sheriff Woody becomes jealous when its owner gets a new exciting cosmonaut toy Buzz Lightyear, and that’s how adventures of Toy Story begin. It has been our kids favourite movie for many years because of every character in it, including the comical Rex.

This nervous dinosaur can’t frighten anyone who actually knows him, but he often overcomes his fears with small but remarkable flashes of courage when he really needs it.

The Super Mario character Yoshi is a T-Rex dinosaur and an adventurous buddy of Mario and Luigi. Yoshi’s best characteristic is his ever-trusted friendship.

According to Super Mario World’s guide, he’s got his name from Yoshi Island because it was revealed there for the first time. In Super Mario series he often acts as a cohesive characterist, even though he is playful and always ready for new adventures.

Chomper from the Land before time

Land before time ir arguably one of the most beautiful and also sad movies about dinosaurs. The friendly dinosaur Chomper is one of the main characters in the Land Before Time.

He is this bluish-purple Tyrannosaurus, which is one of many species of carnivorous dinosaurs called “sharpteeth” in the Land Before Time series. Only Chomper is actually friendly and being a kind friend to the group of the main characters.

One of the all time most loved kids show was once Barney and Friends. The friendly dinosaur Barney for more than 10 seasons was encouraging children and teaching them that everything impossible was actually achievable.

Grimlock is the name of several fictional robot characters in the Transformers robot franchise, including a T-Rex dinosaur.

Grimlock is a wild card among the Autobots. Huge and powerful, he’s also headstrong and reckless. He transforms into a Tyrannosaurus rex, a powerful form that’s essentially a wrecking ball on two legs.

Speckles: The Tarbosaurus from Dino King: An Amazing Adventure

Speckles: The Tarbosaurus is a 2012 3D South Korean computer-generated epic adventure drama film however in the United States the film was released under the title Dino King: An Amazing Adventure.

The plot is following – about 80 million years ago, during the Cretaceous period, a young Tarbosaurus named Speckles, named for his unique birthmark, lives with his older brother, Quicks, twin sisters and mother. The Speckles is left alone when a rogue Tyrannosaurus named One-Eye causes a massive stampede to kill Speckles’ siblings, and personally kills his mother, in order to usurp their territory.

Although looking quite scary, Speckles is definitely a good guy in this plot.

The idea for Super Dinosaur originated approximately two years prior to the series debut. Jason Howard drew a picture of a Tyrannosaurus with a cape for his then-five-year-old son.

Super Dinosaur is the main character’s (Derek’s) best friend. Often referred to as SD, Super Dinosaur was created several years prior when Doctor Dynamo and Doctor Maximus first discovered the Inner Earth. Super Dinosaur ends up as being a very intelligent dinosaur. He then teamed up with Dynamos and started fighting off the evil in the world.

And, of course, T-Rex has participated in a bunch of movies as a bad guy. With teeth so scary and size so huge, it is no surprise that T-Rex is able to so effortlessly scare us all!

Science-fiction adventure movie The Jurassic Park is one of the most popular dinosaur films depicting T-Rex’s fearsome and terrifying being. Among the free-roaming and reborn dinosaurs, T-Rex takes on the main role of the greatest villain, chasing a group of people throughout the whole movie.

Although a giant dinosaur is not a friendly and loving character in this movie, it is one of the most popular T-Rex dinosaurs in pop culture.

Rex from Night At The Museum

The Night Museum is one of the most interesting films of its time. The movie is about a night guard who on the first day of work finds out that, because of a vicious plaque, everything in the museum comes alive at night.

It also includes a TeeRex dinosaur skeleton named Rex. Who could stand in the way for such a charming and fun-loving playmate who only wants to chase the ball?

Momma Dino, known also as Momma, was a female Tyrannosaurus Rex character in the Ice Age series. She kidnapped the ground sloth Sid from his herd when he took her eggs, only to raise them alongside the sloth further on. She is the deuteragonist of Ice Age: Dawn of the Dinosaurs. Although she was protecting her family, we still place her in the villain category hence how scary she appeared.

A protective mother, Momma cared deeply for her young, despite her fearsome appearance and brutish demeanor, and resided with her family in a vast underground world in which dinosaurs were still existant.

T-Rex from The Land of The Lost

The movie Land of The Lost is a real vortex of comic adventures. In the world created by the directors of this film, the scientist Rick takes on a breathtaking adventure with a primate Chuck and some fantastic creatures – also dinosaurs.

The movie also shows one T-Rex dinosaur, who seemed to be in a fight with the other dinosaur Alice the whole time. Needless to say, the whole movie’s questionable flow of events was more fearsome than these dinosaurs.

Some of these characters were certainly known to you, others might not. Either way it is clear that T-Rex dinosaurs were one of the greatest and most fearsome dinosaurs on our planet. You can find out more about them in the article Ten interesting facts about Tyrannosaurus Rex.

After compiling this list, it’s clear to see that it is even more common to see T-Rex as being the good guy in the pop culture.