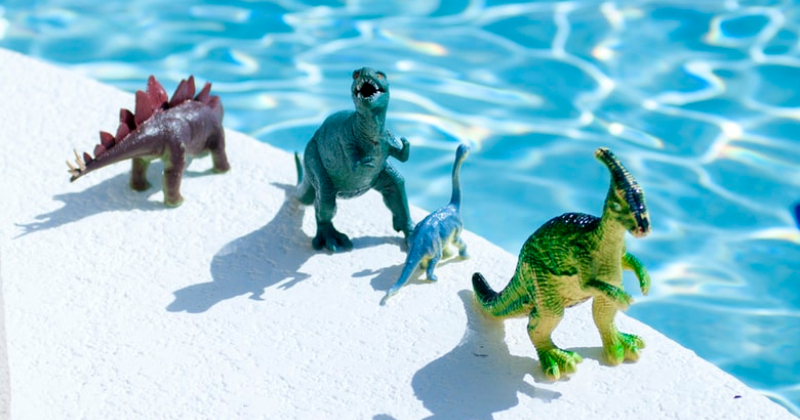 Dinosaurs have inhabited our land about 80 million years ago and have a big impact on the animal species created today. But have you ever wondered – how many dinosaurs can you name and even recognize? If only the huge and famous T-Rex dinosaur comes to kind, use this article as an interesting read and an opportunity to learn more about these fascinating creatures.

We’ve compiled a list of the most popular dinosaurs, which, of course, is very subjective. These are the dinosaurs we’ve seen the most in movies, documentaries and other platforms.

This article will serve as an informative and entertaining way to learn something new and remind yourself of the names, habits and facts of already known dinosaurs.

Tyrannosaurus Rex – the most famous dinosaur

Dinosaur King Tyrannosaurus Rex is hugely popular thanks to a variety of roles on TV screens, its tiny arms and a great name that, in translation from Greek, means the king of tyrant lizards. Spectacular T-Rex fossils and skeletal patterns that stand on two huge legs with short arms, stretched towards visitors, are what excites children of all ages in museums.

On average, T-Rex is of height of 13 m and its head is 1,5m long with sharp teeth which all together is a pretty impressive sight. Given the bone structure of this dinosaur, it probably weighed around 7.5 tons (adult African elephants weigh about 6 tons on average). Despite its size, many paleontologists believe it can run effectively at a speed of 20 km/h. Overcoming a human, of course.

Similar to T-Rex was also a dinosaur named Allosaurus. It’s smaller than Tyrannosaurus Rex, but faster and more fierce with robotic teeth. It’s not completely proven just yet, but this dinosaur might have hunted its prey in pacs. When running, it can reach a speed of up to 30-55 km/h.

The most easily recognizable dinosaur of all is a North American triceratops with a three-horn  face with a parrot-like beak. This dinosaur combines a gentle, plant-consuming expression with three scary horns on its head. Triceratops is from the cretacious period around 68-66 million years ago.

Adult triceratopes are approximately 8 m long, 3 m high and 12 tonnes heavy. This dinosaur species has gained popularity in movies like the Night in The Museum. The dinosaur room in any museum is a wonderful place for dinosaur lovers, and Triceratops bring much attention to New York City’s American Museum of Natural History.

Velociraptor – known also as a Raptor

More than any other dinosaur Velociraptor can track his popularity in 2 of the biggest dinosaur movies to ever exist – Jurassic park and Jurassic world. In these movies this hairy dinosaur, much like a bird, was represented by a much larger Deinonychus dinosaur. Velociraptor’s name actually means “a quick thief”.

Velociraptor was quite small – about 1 m high and 2 m long, smarter than most dinosaurs and a quick runner on two hind legs. It was able to reach speeds up to 64 km/h, which was particularly useful when running away from fast predators. Fossils found in northern China, the Gobi Desert in Mongolia and Russia are with sharp teeth and long, siren claws.

Although they flew and their front limbs stretch out to the sides and Pretodactyls are not dinosaurs, we still included them in this list. They’re very popular and what’s even more fascinating than a dinosaur? One that can fly!

They’re considered a distant dinosaur cousin. Pterosaurs lived from the late Triassic Period to the end of the Cretaceous Period, when they went extinct along with dinosaurs. Just like birds, pterosaurs had lightweight, hollow bones which allowed them to freely fly.

Stegozaur in translation means a rooftop lizard and it stands out with the strange plates on his back. They were about 60 cm long and 60 cm high. Its exterior is precisely the reason for this dinosaur’s popularity in various films and cartoons.

No one knows why Stegosaurus had these strange plates and what they were meant for. Some scientists believe that the dinosaur’s spiky plates could be brightly colored and moving, repelling  opponents. Thanks to the films and thematic parks of the Jurassic world, this elephant-sized dinosaur conquered many hearts as a peaceful plant eater wandering across plains in North America.

Not so far from other dinosaurs Spinosaurus, or a spinal lizard, is also pretty well known. It differed with its huge size and the ability to reach a length of 17 m. In terms of weight, it overcame the T-Rex dinosaur by a few tons. On its back there is a mysterious 1.6 m sail with a fin that resembles a fan. The scientists are still arguing about what it was there for.

Among the few fossils discovered in Egypt and Morocco, Spinosaurus was mostly eating fish and it was possibly one of the first dinosaurs to swim. Although the strong hind legs convincingly indicate the ability to reach speeds of up to 24 km/h.

Was it a bird, a dinosaur or something between the two? Anyway, the most famous of such dinosaur artifacts in the world are the extremely well-preserved fossils of Archaeopteryx. Its name in translation means the ancient wing.

Although this dinosaur had wings, scientists still question the theory of whether it had been able to fly or float. Along with the fearsome claws and sharp teeth, this dinosaur leaves room for imagination.

Like the Velociraptor, Brachiosaurus has acquired much of its current popularity in the 1993 film Jurassic park. It was munching on tall trees, and it certainly proved that this huge giraffe-like dinosaur was exciting by itself.

Based on fossils found in Algeria, Portugal, Tanzania and the United States, an adult Brachiosaurus is believed to have a body of 24 m lenght with a neck of 9 m and a weight of 62 tons. Although it wasn’t the tallest dinosaurs of them all, it was definitely the most popular one today. Some of the similar dinosaurs were also Apatosaurus, Diplodocus and others.

Parasaurolophus was a herbivorous dinosaur that lived in what is now North America and possibly Asia during the Late Cretaceous Period, about 76.5–73 million years ago. It was an herbivore that walked both as a biped and as a quadruped – meaning on both 2 and 4 legs.

Parasaurolophus is an average sized hadrosaur, but is otherwise distinguished by its prominent, curved crest. The base cosmetic gene of the Parasaurolophus has a light brown body and a white underbelly. Also it can be recognised from its reddish back and crest, and dark brown stripes on its legs.

Ankylosaurus, although huge and scary looking, was a herbivore. It is often compared to an army tank or bus, because Ankylosaurus was a heavily armored dinosaur with a large club-like protrusion at the end of its tail.

Ankylosaurus means “fused lizard” in Greek, and it was given that name because bones in its skull and other parts of its body were fused, making the dinosaur very rugged looking. The largest Ankylosaurus specimen ever found was 6.25 meters long, 1.7 m tall at the hips and 1.5 m wide. It is likely that it weighed up to 3.6 tons.

Apatosaurus has gained popularity with the fact that it is known as Brontosaurus, a name associated with the Flinstones – cartoon family that so many have loved watching while growing up. Besides, of course, the dinosaur also appeared in the Jurassic park movie. Its real life size can  be seen face-to-face at Chicago’s Museum of Natural History.

Apaosaurus, in translation the misleading lizard, hatched from 30 cm wide eggs. Their unique adult dinosaur faces is what is worthy of cash ditches – whereas this dinosaur is capable of growing up to 27 m long. Its use of the 15 m long tail is still one of the many mysteries. Fossils have been discovered in Colorado, Oklahoma, New Mexico, Wyoming and Utah.

In spite of what you may have seen in the Jurassic park, Dilophosaurus doesn’t spit venom, it doesn’t have a collar and it certainly isn’t the size of a Labrador retriever dog. Yet this dinosaur remains popular among dinosaur lovers even after they learn the reality.

After studying fossils in North America and China, scientists estimate that Dilophosaurus was about 6 m wide in height from head to tail. Their weight reaches approximately 450 kg. The mouth of Dilophosaurus was full of sharp teeth, so it is safe to claim that they were predators, mainly feeding on small animals and fish.

And this was the last dinosaur in our popularity chart. For more fun facts and information about dinosaurs look into the following article Most famous T-Rex characters in the world.