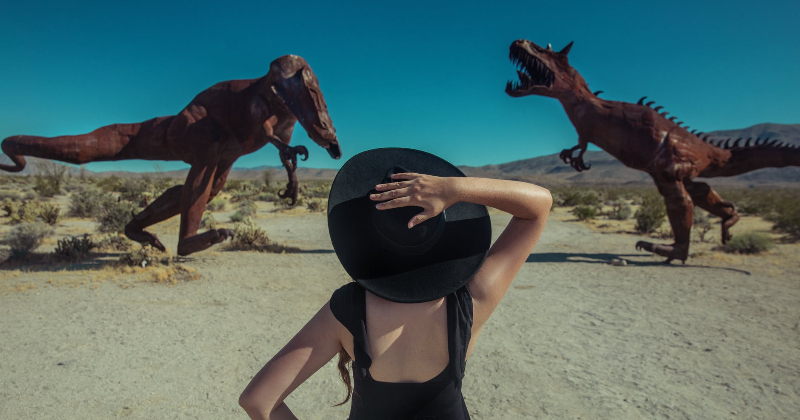 From all dinosaur species T-Rex is definitely the most famous dinosaur. Most of T-Rex’s popularity has been gained from appearances in popculture – popular movies, cartoons and series. And even before that T-Rex was the most popular dinosaur up to ‘90s, when it was the biggest known carnivore that has ever existed on Earth.

To find out more about this dreadful dinosaur and learn some interesting facts, keep on reading the article down below.

However if you’re interested in finding out more about dinosaurs in general, we also have an interesting article – Most popular dinosaur species.

Tyrannosaurus Rex in translation from Greek and Latin means Tyrant Lizard King, emphasizing dinosaurs huge size and dominance towards all the other species. Since all the dinosaur names are so long, it’s often easier tocall them by shorter names. So for Tyrannosaurus Rex it’s most common to hear it being called simply T-rex.

Dinosaurs excite scientists and history enthusiasts with their huge and breathtaking sizes. It is hard to imagine nowadays that once there were such hugecreatures roaming our panet.

Tyrannosaurus Rex was one of the largest dinosaurs on the planet, reaching a length of 12 m and a height of 6 m. Its weight reached about 6 tons and its heavy tail served as a steady stabiliser for this two-legged dinosaur.

These unimaginably huge predators were relatively short-lived, but they have had a big impact on today’s human understanding of dinosaurs. In fact specimens that’ve developed from these dinosaurs still exist, for example, in the form of lizards.

Similar to today, millions of years ago, animals categorised into groups of carnivores  and herbivores. Although there were many herbivore dinosaurs eating raw plants, T-Rex was not one of them. That is why this dinosaur has won the title of the most popular and fearsome dinosaur – because of its fearsome teeth and predator lifestyle.

5. One T-Rex tooth size-vise is equivalent to one banana

The dinosaur-era king T-Rex had a jaw filled with whole 50-60 teeth, where the size of one tooth was equivalent to a medium-sized banana. Experts say these predators were able to rip off nearly 100 kg of flesh with just one bite which, to think about, seems absolutely frightening.

Capable to reach the age of up to 28, Tyrannosaurus Rex was able to reach the running speed of 20 km/h. Although they are not the quickest dinosaurs that existed (some were able to reach speed up to 60 km/h), they would certainly be able to catch a human being. The bigger the T-Rex is, the bigger distance in a shorter time he can run.

7. T-Rex is the biggest movie star amongst the other dinosaurs

Since T-Rex is one of the few most popular dinosaurs, it makes sense to wonder why. Since the biggest T-Rex discovered in the 90’s, people realised just how big these creatures can be. They are very similar to the idea of a monster, so naturally T-Rex started to fit in pretty good in a bunch of different roles in movies. T-Rex is mostly seen as being a gigantic villain.

Nowadays this type of dinosaur is seen in many well known movies, for example, The Night at the Museum and the famous Jurassic park series.

8. The little arms of T-Rex still remain a mystery

While some scientists view the small arms of T-Rex as a result of an unfinished evolution, some think these little arms were pretty useful for tearing up the prey. Despite the seemingly small and weak hands, either way it ends up being 10 cm longer than an adult’s full-size hand. So the small T-Rex’s hands were not so small after all.

9. The brains of T-Rex were twice as big as other carnivors

While investigating the T-Rex skeleton, scientists discovered its brain size is 2 times larger than other predators of its time which is very fascinating. Its big nasal cavity suggests that the T-Rex dinosaur has also had a brilliant sense of smell that has helped in the hunt.

It also had one of the largest eye holes, which makes us think that the T-Rex dinosaur also had brilliant vision. In addition, the skull shape also proves that the dinosaur’s eyes were more in the bow than other dinosaurs, providing T-Rex with a binocular, 3D-like vision. Scary, smart and with a great vision – a perfect villain that could destroy everything on its way!

10. More than 20 almost complete T-Rex skeletons have been found

To this day, more than 20 T-Rex skeletons have already been found. 20 years ago, the skeleton of the largest T-Rex dinosaur, whose remains are best preserved, was found. The size of this skeleton is whole 13 m long. Currently, the skeleton is in one of the U.S. museums.

This T-Rex has been called Sue which indicates its gender being a woman, although it is still not clear whether the 13 m-long dinosaur was a representative of women or men. It’s been sold to museum for 5 million pounds.

If you want to continue the entertaining reading of articles about the T-Rex dinosaurs, look into our article called Most famous T-Rex characters in the world.